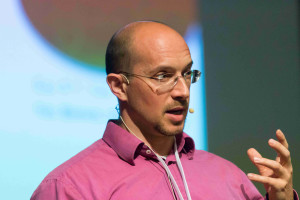 In his keynote, Christian Ottmann presented his work on the so-called 14-3-3 proteins. These proteins are ubiquitous in eukaryotes, have highly conserved primary sequences and were first described already in 1967, but are still primarily known for their incredible stickiness. With more than 500 known interaction partners, you could say that they stick to everything, says Ottmann. Which makes these proteins interesting players when studying protein-protein interactions (PPIs). Ottmann: “Modifying PPIs through small molecules offers great potential for drug development. More than 60 PPIs can be successfully addressed through inhibitors, with hundreds of molecules known to have such an effect.” Inhibition is a common form of such modifications, but there are other options, according to Ottmann. “Stabilising PPIs may also be very useful. Nature has a number of examples of such stabilisers, including the immunosuppressant rapamycin and the plant hormone auxin.” These stabilisers are (small) molecules that bind 14-3-3 proteins to other partners, thereby influencing a pathway. Among the interactions partners of 14-3-3 proteins are numerous key players in various diseases, including Raf kinases and p53, which are strongly associated with different types of cancer. The structural characteristics of the 14-3-3 proteins ensure a variety of binding pockets for small molecules, leading to a broad array of potential stabilisers. So far so good, but there is one big issue to overcome: specificity. The abundance of binding partners makes 14-3-3 attractive objects of study, but it also makes it very hard to secure specificity, Ottmann admits. “Moreover, 14-3-3 proteins are ubiquitous so even when only a tiny fraction is targeted in an unwanted location, the effect can be huge.”