Alexander Schönhuth (CWI, Amsterdam) explained the need for a way to assess and compare SV prediction tools. Many tools are available, but it is generally unclear how they perform. According to Schönhuth, we need tools for benchmarking, a meta-tool platform and a merging package. His group has developed a new benchmarking services that allows researchers to determine which tool is best suited for the genome they’re studying.

Next, in what later turned out to be an award-winning lecture, Roy Straver (VUmc, Amsterdam) presented his work on Wisecondor. Using this tool, fetal aberrations can be identified in maternal plasma, thereby offering a much-wanted non-invasive alternative to conventional invasive and thus potentially harmful prenatal testing methods. The main issue to tackle here for Straver was to assess whether low coverage NGS data offer sufficient information to reliably identify the presence of trisomy 21 (Down’s syndrome). The reason to opt for low coverage NGS data is a simple: they are cheaper than data obtained by deep sequencing. For a method to become routinely applicable in the clinic, costs are a major issue. And low coverage data are affordable for the clinical setting. But they are less dense in information. Still, using Wisecondor, the team succeeded. Low coverage data do deliver detailed information on fetal aberrations. Not only were they able to detect trisomy 21, the data also allow detection of trisomies 13, 18 and 22. “We can detect chromosomal and sub-chromosomal duplications and deletions using low coverage NGS data”, Straver concluded. The non-invasive prenatal testing approach is now being implemented in the clinical practice.

To show the broad relevance of NGS, Saulo Aflitos (Wageningen University) took the audience to a completely different study object: the tomato. He applied NGS on 85 tomato genomes to map clads or fylogenetic ‘branches’ within the tomato family. Aflitos used old and new cultivars, as well as wild type tomatoes that grow under extreme conditions and are mostly inedible or even poisonous. As reference, he used the – no joke – Heinz genome. One of the outcomes is that new, intensively bred Lycopersicon cultivars exhibit genomic erosion. While being bred for certain traits, they have ‘lost’ a lot of the genomic information and diversity along the way. 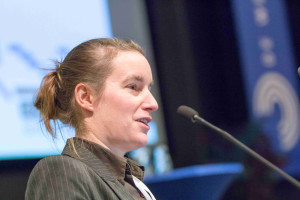 Finally, Jayne Hehir-Kwa (Radboud UMC, Nijmegen) put the spotlight on the Dutch genome, the human Dutch genome that is. She presented intermediary results from a Genome of the Netherlands (GoNL) subproject on structural variation in the Dutch genome. One of the findings is that non-homologous recombination is a common mechanism underlying structural variation. It also appears that large deletions tend to occur early in replications. An intriguing question is of course whether de Dutch genome harbours any novel SVs or at least, novel when compared to the references. According to Hehir-Kwa, some ‘novel’ sequences were found, but as they could be matched to the genomes of respectively the rat and herpes virus, there might be an issue with contamination of the machine… On the upside, some de novo SVs were also found, when comparing offspring to parents. What would really help though in these type of studies is a tool that can tackle all types of SVs. Conclusion: lots of work still ahead.